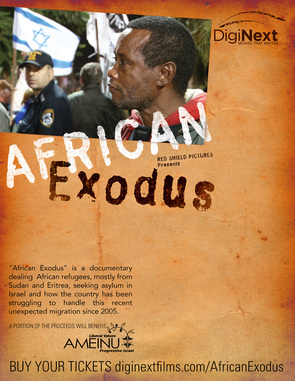 Since 2005, sixty thousand non-Jewish Africans, primarily from Sudan and Eritrea, have fled the wars and dictatorships of their home countries and made their way through Egypt and the Sinai desert into Israel, the Jewish homeland. These Africans, mostly refugees and asylum seekers, have risked their lives in the hope of finding a safe haven until they can return home. Paradoxically, they are considered “infiltrators” in a country that was founded by and for refugees – Jewish refugees – but is unprepared and seemingly unwilling to handle this wave of Africans.

Ameinu, Charitable Partner in the Distribution of African Exodus
The distributors of African Exodus are partnering with Ameinu (Our People), a liberal Zionist organization comprised of progressive North American Jews committed to peace and economic justice around the world. Ameinu promotes a secure peace between Israel and its neighbors, particularly the Palestinians, and has a deep partnership with the Israeli social justice movement to foster democracy, human rights and coexistence. Ameinu will receive a portion of all proceeds from African Exodus screenings.

Help Ameinu by Organizing a Screening of African Exodus
African Exodus is being distributed by DigiNext, a leading distributor of feature films and documentaries. To arrange a screening of the film in your local theater, community center, synagogue or private residence, please contact Michael Abrams at mabrams@diginextfilms.com. Or click here for more information on attending or hosting a screening.
Filmmaker Brad Rothschild’s Blog Posts (click on embedded links):

In this documentary, African refugees living in Israel share their harrowing stories of life in Africa, their journeys from their countries through Egypt to Israel, and the racism and discrimination they face in Israel. Currently, Israeli government officials maintain that Africans are "infiltrators" and a "cancer" to society, and treat them as such instead of granting them rights as refugees. Watch as Israel, an early signatory of the 1951 Refugee Convention, which established rights for all refugees around the world, systematically defies this convention, and hear first-hand experience of how the government's policy of deterring asylum seekers is inhumane and unjust.

The Right Now coalition was formed in June, 2012 by Jewish Americans as a response to the Israeli government's mass deportations of South Sudanese refugees back to their war-torn homelands. This film was produced in two weeks because of the time-sensitivity of the issue. We call on the international community to be a voice for African refugees who are being silenced, punished, and now involuntarily repatriated or jailed.